I had no idea what it felt like to have a harness that fit until I climbed in the Slight from Rock Empire.

I’ve been on a mission to find a harness that actually fits me for a solid two years. During my first decade of climbing, I wore a harness that way too loose around the waist and would bruise my ribs and legs if I took or caught too many falls in a day. When I returned to the sport after a three-year hiatus and started projecting steep sport routes, jolts of pain would reverberate throughout my body after a harder catch or when belaying. The best solution I could find was to slide a thick piece of foam behind my back while belaying – not a long-term fix.

This April (2018), I visited the Elbe Valley on the border of the Czech Republic and Germany. Sandstone cliffs and towers rise above of the trees on either side of the river, offering otherworldly routes on stone straight out of a fairytale. Rock Empire is based just downriver, and I got a chance to wear a few of their harnesses. When I first put on the Rock Empire Slight women’s harness, it was like what I imagine it feels like to put on glasses for the first time: “This is what it’s supposed to be like!”

The Slight 3B is the only harness I’ve worn that actually adjusts to my waist size and provides my back with the support it requires and deserves. The whole harness is so lightweight (a medium is 296g) that I once had to look down to check if it was still there. The waist belt is broad and flexible. Despite that it was 10 degrees too hot to be scraping my skin off on sandstone slopers, my back didn’t get too sweaty under the mesh. It sits snugly between the bottom of my lower ribs and the top of my iliac crest. Because the material is supple, it provides support without hindering movement.

Both versions, the Slight 1B and the Slight 3B come with all the standard features one expects in a modern, fully-functional sport harness: self-locking buckle at the waist, four gear loops, adjustable butt straps, and a haul loop. More specs are detailed on their product page.

The belay loop is thin and quite big, giving me ample room to tie in to more than one rope.

I really like the rectangular shape of the gear loops, which are each rated to 5 kg, and let me load them up with all of the knotted bits of rope and slings sandstone climbers use in this corner of the world.

I wore both models, but because of my apparent uncommon proportions, the 3B fit me best. The leg loops are adjustable and stay adjusted while climbing. While walking around, the leg loops bothered my inner thighs; once loosened, I could hike in the harness without any unwanted chafing. The rise is shorter than on some women’s harness, which, in combination with the adjustable legs, makes my lower back so happy.

Compared to similar harnesses on the market, both the 1B and 3B of the Slight are at least equal in quality and manage to be significantly less pricey. I could buy both colors of this harness plus a T-bone steak for the price of one Arc’tryx AR-385 (which isn’t even made in my size).

Once, I tried on 12 harnesses in one day, from the AR-385, to the BD Momentum for men, to a kid’s Petzl harness. Nothing worked. In 2017, I ended up in a harness that was a significant improvement. Nevertheless, it was bulky and left long bruises along my thighs and iliac crest. I thought I was destined to a life of suspicious bruises, lower back pain, and funky looking toes. Climbing is worth it; but, as it turns out, two of those three sacrifices aren’t a necessary part of the game. Finally, my hunt is over. 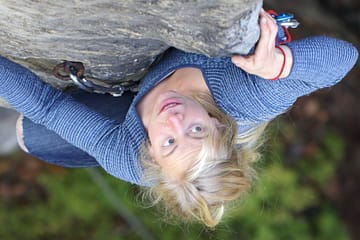 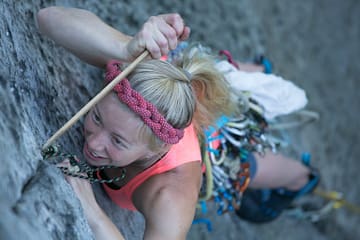